The Folk Festival is an annual event, held in late October, and echoes the autumnal harvest festival. The festival aims to bring professional folk artists of high repute to Okehampton and to establish a festival community over the weekend that includes visitors, artists and local people in a celebration of folk music.

We do this by combining concerts, playing/singing sessions, and folk clubs with street performances and outreach events in shops and other community buildings. The Wren Music team hosts the weekend assisted by volunteers, including the ever trusty Ale&Cake on meals and refreshments. Find out more about volunteering.

Click here to view the full running order of all events to plan your days!

Friday: all events are at the Charter Hall. Box Office and bar opens from 6.00pm. 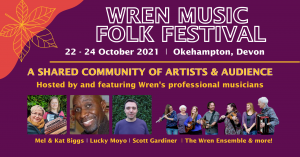 Join us at the Wren Music Folk Festival, now in its 21st year!

With performances, workshops, dances and folk clubs there is really something for everyone. Perform at our folk clubs or join featured artists at our ‘Share The Stage’ concerts. Or if you prefer to sit and listen, we’ll keep you entertained all day. Established catering crew Ale&Cake will keep you fed and watered all weekend too.

Wren Music’s professional musicians feature alongside fantastic folk musicians from the UK and beyond. There are plenty of chances to get up and close personal with the artists too, as they lead workshops, give talks and may just sit next to you at our Saturday Supper!

Our programme is designed for all ages and everyone is welcome to all events. Some events are specifically designed for children, and some events may be more suitable for those with additional needs. In our relaxed performances, the house lights stay on, the doors stay open and the audience should feel comfortable if they need to move or make sound.

Okehampton is a delightful old market town on the northern slopes of Dartmoor. The comfortable indoor venues are all within very easy walking distance of each other, right in the town centre, with car parks, cafés and shops nearby. There’s a wide range of accommodation to suit all pockets within and near the town and a good taxi service.

Make sure you also add on a ticket to our Saturday evening Supper! Catered for by festival favourites Ale&Cake, we’ll be serving a hearty meal alongside some special entertainment.

Mel & Kat Biggs – interweaving traditional British and European dance repertoire with many of their own original tunes and songs influenced by their years in The Morris, travels across Europe and shared passion for history.

Lucky Moyo – International singer, songwriter and singing leader. Lucky has toured into and worked in 48 countries performing at the Royal Festival Hall London, JFK Centre in Washington DC. He has performed for Her Majesty Queen Elizabeth II and Nelson Mandela!

Scott Gardiner – one of Scotland’s top traditional singers best known for singing the bothy ballads and songs of the north-east. He’s represented Scotland at the Smithsonian Folklife Festival in the USA, won the Bothy Ballad World Championship in Elgin and had two nominations for Scots Singer of the Year at the MG ALBA Scots Trad Music Awards.

Before this, in the late 1980s, The Wren Trust (now Wren Music) was hosting a monthly folk club in South Tawton with locals and nationally well-known acts performing alongside each other. In 1989 Wren was asked to host a summer festival in Okehampton which involved the local community. During this time, Marilyn used to visit Exeter library to find new folk songs from archives, both for her own performance and that Wren could use in workshops and projects.

Wren created a special concert in 1989 ‘Songs of the West’ to mark the centenary of the publication of the book of the same name, by Sabine Baring-Gould. During a recording of this concert at Killerton House, Wren was shown some extra personal notebooks belonging to Baring-Gould that were not known about in the folk music sector.

Wren secured funding to have these books scanned and transferred to microfiche. In 1998 the microfiche was launched. Wren Music also created another album of songs from the collection, called ‘Dead Maid’s Land’.

Wren then secured further funding to host the first festival and study break, so more people could study the microfiche and learn these songs. The festival always included an international element, sharing traditional music from somewhere that Baring-Gould had visited. Holding the festival in October promoted tourism in the offseason, and avoided clashing with other local folk festivals. The first Baring-Gould Folk Festival and Study Break took place in 1999 in villages across West Devon.

The Baring-Gould Folk Festival then ran annually until 2019. As Baring-Gould gained more recognition in the folk world, we felt able to diversify the Folk Festival, to share other works from the local area and around the world.

In 2020, the newly named, Wren Music Folk Festival ran online due to the Covid-19 pandemic. Physically distanced but socially connected. The 12-hour festival had special guests leading workshops and guest spots in the folk clubs. Wren Music’s patron Peggy Seeger joined the evening folk club, Lucky Moyo ran a singing workshop, Paul Sartin led a musicians workshop. Plus we had artists joining from the USA, Newfoundland, Iceland and Latvia as well as the 4 corners of the UK. Specially filmed concerts included performances from the Wren Musicians, Paul Sartin and Jim Causley. 2020 Festival concerts are still available to watch on our YouTube channel.

From 2021 the festival will resume in person in Okehampton, drawing people from across the UK and beyond. We look forward to welcoming you!